skip to main | skip to sidebar

I've never been one to gawk at celebrities. I try to spend my time in the grocery aisle watching the shoppers ahead of and after me to guess what they are eating for the week. Even at the dentist or doctor, I'd rather check twitter than pick up People. But somehow, the Oscars feel different. It's a graceful event, and unlike other award shows, most aren't there for shock value. I loved the Oscar's reflective tone this year. Doesn't it seem that we've become a little more serious and a little more reflective as a culture? Am I dreaming that or does it seem that public times and spaces like the Oscars are being used to think about what these experiences mean to us?

Maybe I am giving too much meaning to something that is at it's core entertainment to be consumed, enjoyed and forgotten. If so, at least I promise not to follow suit with the foods we ate while being thoroughly entertained. 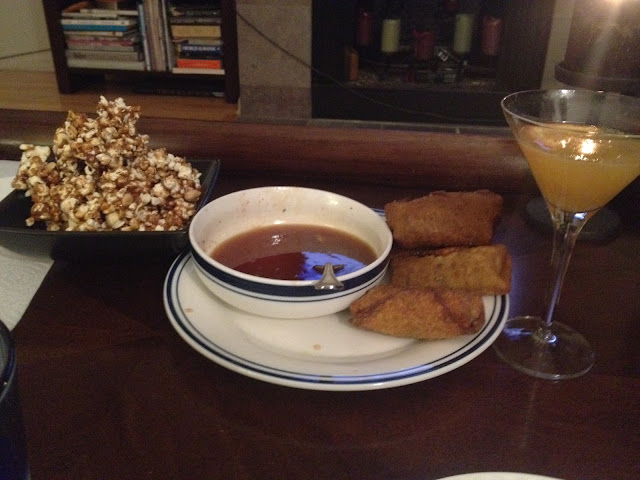 SoCo Punch: I yanked it from Martha but can I awkwardly give homage to the Descendants? It was based in Hawaii right? With plenty of citrus and plenty of booze, these little sippers seem like the perfect accompaniment to large land trust legal battles...We doctored up the recipe by dashing some angostura bitters at the top of each glass to give it a little more depth.

Carmel Corn Clusters: (Moneyball) a lighter, airy take on an old favorite. Perfectly reminiscent of baseball. Forgive the pun but the homemade caramel knocked it right out of the park.

Jamaican Beef Dumplings: (Extremely Loud & Incredibly Close) Not quite sure how Jamaican dumplings tie back to a little boy in NYC but the dumplings themselves were fantastic. Salty, spicy, crunchy... Homemade fried food is my new favorite.

Deviled Eggs: (The Help) Perfect representation of the film and Epicuriuos didn't mess with the old classic recipe. 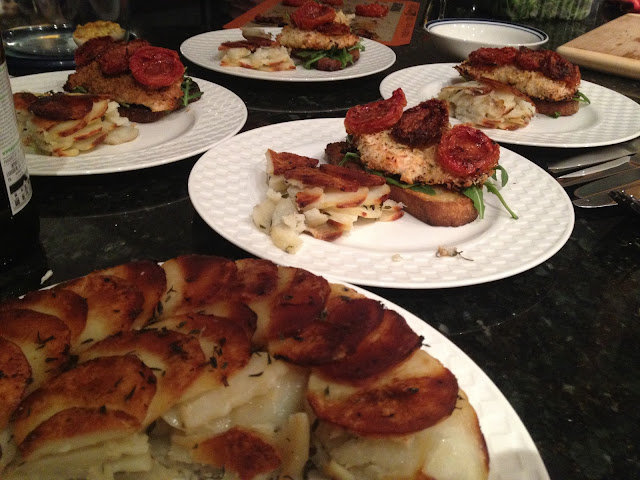 Oven-Baked Chicken and Slow Roasted Tomatoes: (Hugo) Despite an over crisped bread base, the sandwiches themselves came together nicely. Yogurt marinade kept the thinly pounded chicken moist and light, roasted tomatoes sweet and arugula for a peppery kick. I think I seriously tweaked out my oven leaving it on for 8 hours for the tomatoes since everything we baked in it afterward came out oddly charred but unevenly cooked.

Pommes Anna: (The Artist) Alright so this wasn't part of the Epicurious menu but I've always wanted to try this method for potatoes and it's an all out stunner. Truffle oil, thyme and salt is about as French as you can get. 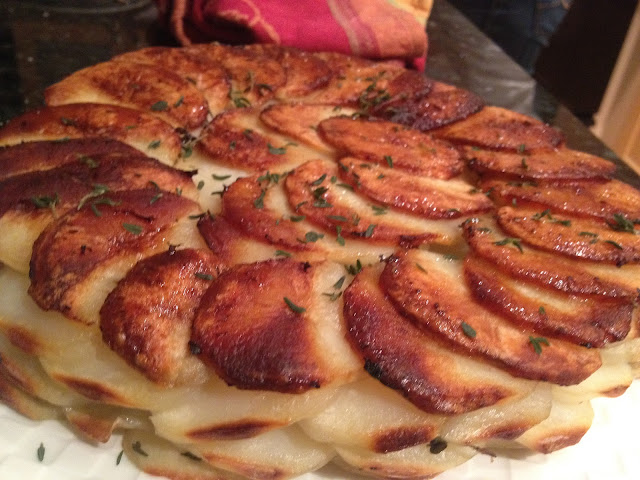 Pear and Almond Tart: (Midnight In Paris): Pears, tarts, and almonds all are spot on classique francais.Unfortunately the oven did further damage to this lovely little tart (see note on the chicken above) but the almond filling and crumbly crust stood up well next to simple syrup poached pears. 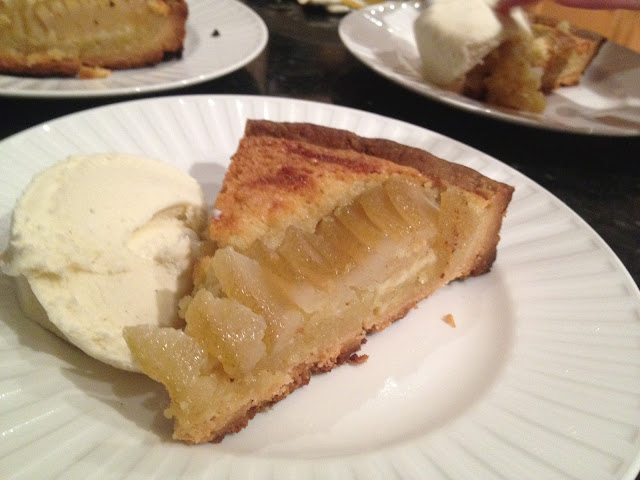 Damon drank a new gluten-free beer which I'm counting as a nod toward the War Horse (British right?) but Tree of Life missed out entirely. Interestingly enough, not unlike the award recipients themselves. All things considered, I think we focused on the important. And as we decided last night, they should cut back down to 5 selections for Best Film anyway. 10 is just a bit superfluous. As was Angelina's leg. And J Lo's chest. In fact, I'll go back to focusing on my neighbors grocery purchases and leave the star gawking to those who do it best. Cheers!
Posted by GreenSug at 9:30 AM

GreenSug
Trading pork bellies and coffee by day, then roasting them all up at night, Joanna is a commodities broker by trade, urban farmer/food adventurer at heart. She graduated from Kendall with a certificate in Professional Cookery, writes for Gapersblock.com/drivethru and used to keep chickens in her backyard.